Miłość Gallery is a private initiative founded on the borderline of activism and reflection on creating and exhibiting art. Its endeavours are based on the belief that art is a byproduct of the relationship and is imbued with the context of daily life. The gallery's idea remains the curatorial and art project. It is authorial and non-commercial activity. It can be posited as a hybrid of the authorial and the artist-run space type of gallery, but the most important for us is to make it a living and active site related to the contemporary art. The gallery was founded in 2014 and is run by Natalia Wiśniewska (artist) and Piotr Lisowski (curator & art historian). The gallery collaborates with a YouHaveIt Foundation from Toruń. „Miłość” means in English „love”. At Supermarket 2017 Miłość presents the exhibition with the participation of six Polish artists collaborating with the gallery: Piotr Bujak, Katarzyna Malejka, Lech Nienartowicz, Liliana Piskorska, Tytus Szabelski, Natalia Wiśniewska. The show is titled "The Hygienists".

"The Hygienists" exhibition is a commentary resemblant to the "graphic journalism", referring to the topic of the political, economic, social and institutional violence (art). In the face of the geopolitical change, the political and economic turmoil, the blurring of boundaries between global and local, the pluralism of social and cultural life, the radicalism of attitudes, there is a strong need to redefine one’s place in the public space. On the one hand, there is a movement aiming to participation and social renewal. On the other, there are processes of fencing off and controlling public space, implementing division and segregation. Before our very eyes there is a new reality shaping itself, where different kinds of attitudes and beliefs are clashing. There are growing radical tendencies overflowing with instrumental treatment of individuals, which is symbolically and provocatively emphasized by the title of exhibition. Works of artists that are presented on exhibition – based on the subversive strategy – indicate the potential, hidden control mechanisms touching the individual and the entire social groups alike. They are not creating ready-made answers but rather are putting intuitive questions about fundamental values such as freedom, tolerance, and sense of security. They raise issues related to the exclusion, ideologisation, appropriation, or domination. Paradoxically they refer both to discord and rebellion as well as anxiety and helplessness resulting from entanglement in the areas in which we do operate on a daily basis (social, cultural, political). ARTISTS: Piotr Bujak (b. 1982) – graduate of San Francisco Art Institute. PhD student at the Faculty of Arts at the Pedagogical University in Kraków. He is interested in activities integrating minimalism, conceptualism and critical art. His activities are based on the Low Budget, the Do It Yourself, and the Quick and Dirty strategies, with maximum of formal-aesthetic discipline. He lives in Kraków and Będzin. Katarzyna Malejka (b. 1985) – a graduate of the Faculty of Fine Arts at the Nicolaus Copernicus University in Toruń (Fine Arts Intermedia Institute), where she continues her education at PhD studies. She is seeking her own forms of expression within the area of new media. She creates usually in contexts of already existing space by implementing action from minimalist interventions to complex site-specific installations. Since 2013 Katarzyna is involved in the art community gathered around the GnW group. Member of the NooNoo collective that creates graphic design addressed to the cultural & art sector. She lives in Toruń. Lech Nienartowicz (b. 1983) – co-founder of the cassette label Pawlacz Perski, member of impro-collectives such as: Perpetual Motion Food and Poszmeg. As part of the glitch duo Porcje Rosołowe recorded, for instance, an album, full of digital errors and distortions, which is a dialogue with cyber poetry by Łukasz Podgórni, he also completed a series of recordings which are a sound chronicle of lives of the imaginary insects. The latest release published by an American label Futher Records is a meditation on the material dimension of the magnetic tape. He lives in Toruń. Liliana Piskorska (b. 1988) – graduate of the Faculty of Fine Arts at the Nicolaus Copernicus University in Toruń, where she is currently continuing her PhD studies. On one hand, in her works appear feminist threads, although more in the category of search of identity or pastiche (playing with one’s image) and on the other, these actions are analytical and relating to the socio-cultural context. The field of her interests include topics related to corporeality, animality, power relations and subversive treatment of normativity and oneself. She lives in Toruń. Natalia Wiśniewska (b.1985) – studied at University of Arts in Poznań, where in 2010 she obtained a diploma in graphics. The co-founder and the curator of the Miłość Gallery in Toruń. She is a PhD student at the Nicolaus Copernicus University in Toruń majoring in the Visual Arts. The author of installations, objects, site-specific actions. She is experimenting with sound and form. In her works she undertakes research on relationships and mutual entanglement of the individual in the socio-cultural processes. She works contextually combining the simplicity of form with the place and the semantics of language. Her interests focus on what appears at the junction of concepts and meanings. Lives in Toruń. 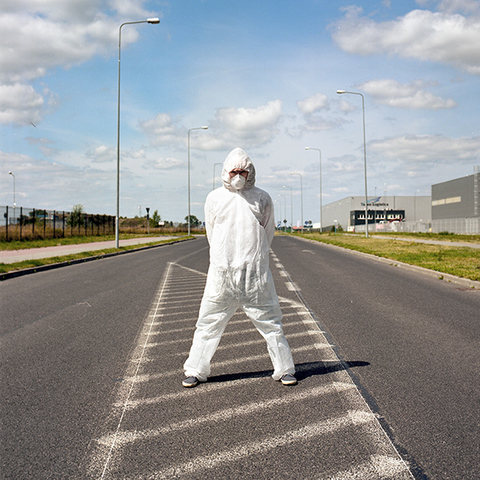 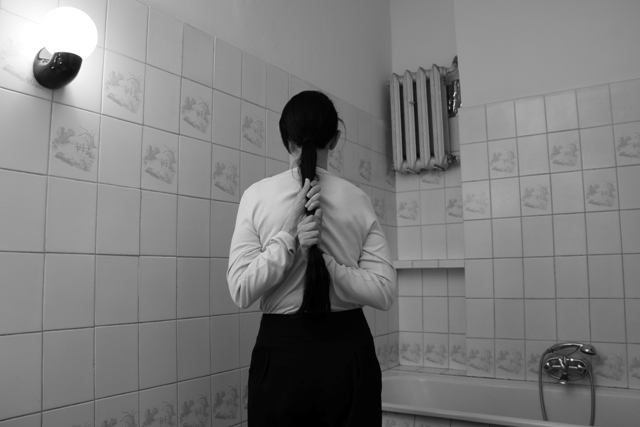 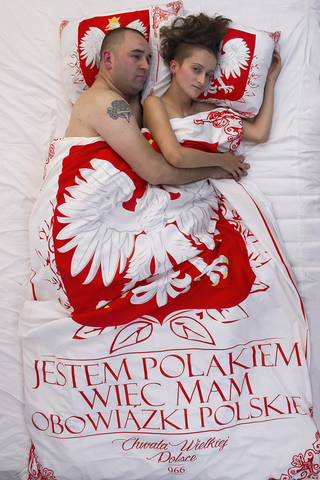 Liliana Piskorska, 'Self-portrait with borrowed man (I am a Pole so I have polish responsibilities)', photography print, 40x30 cm, 2016 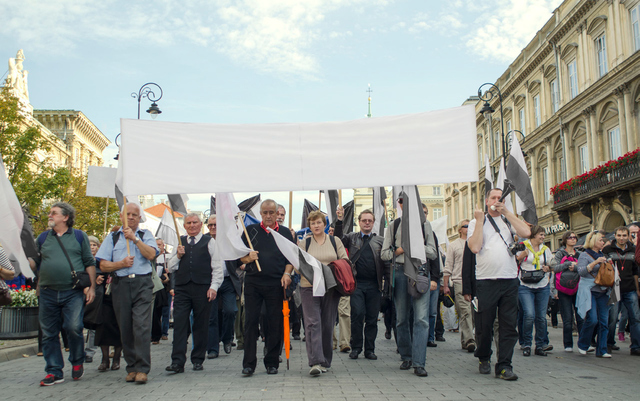 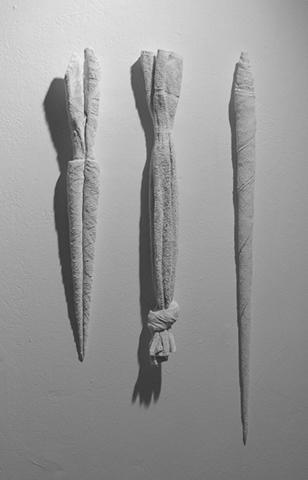